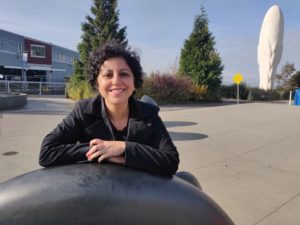 She was selected as an International Leader on films for social change organized by the U.S. Government in Jan. 2020. She has been making documentary films from Social Justice to Environment conservation.

Her films have been broadcast on National Geographic, Fox History, Doordarshan and endorsed by Busan International film festival “AND FUND,” DOCWOK by DOC Leipzig Germany, PSBT India, Ministry of Information and Broadcasting. She studied Film Appreciation from Film and Television Institute India, Pune 2012.

Her debut independent documentary ‘1984, When the Sun didn’t Rise’ is the recipient of President’ National Award for Best Investigative film in 2018. It received the “BEST DOCU. FEATURE award” in DC Asia Pacific Film festival, U.S.A. 2017, Certificate of Merit in Direction by Indian Documentary Producers Association, IDPA 2018, Busan International Film Festival’s prestigious fund called “AND” Fund. It got invited for screening in U.B.C. Vancouver and more than 30 universities in Canada, the U.S., and the U.K.

She has a broad-based background in Television and Media. She has worked with India’s largest Broadcaster, Zee TV in 2007 as a Promo Producer, and a Core Team member of Trends Ad films on producing T.V. Commercials after that. She has studied Post Graduation in Mass Communication from Bhartiya Vidya Bhawan, New Delhi. She is a Production and Industrial Engineer from M.B.M. Engineering College, Jodhpur that is a Regional Engineering College. She has been producing films under her banner “Green Earth Pictures” www.greenearthpictures.in